I have always been an enthusiastic advocate of passive solar design. The concept is so simple: rearrange the building components to maximize the harvesting and storing of solar energy. Do this by moving most of the windows you’re installing to the sun facing wall and maximize the amount of mass incorporated in the interior of the house by incorporating concrete or tile in the floor or walls.

The windows on the sunny side let in solar energy, heating the interior of the building and the mass slowly soaks up this energy – directly or indirectly, preventing the building form over-heating. At night the mass component slowly releases this stored energy back into the interior space, compensating for the heat loss and thus mediating the temperature fluctuations of the interior atmosphere. 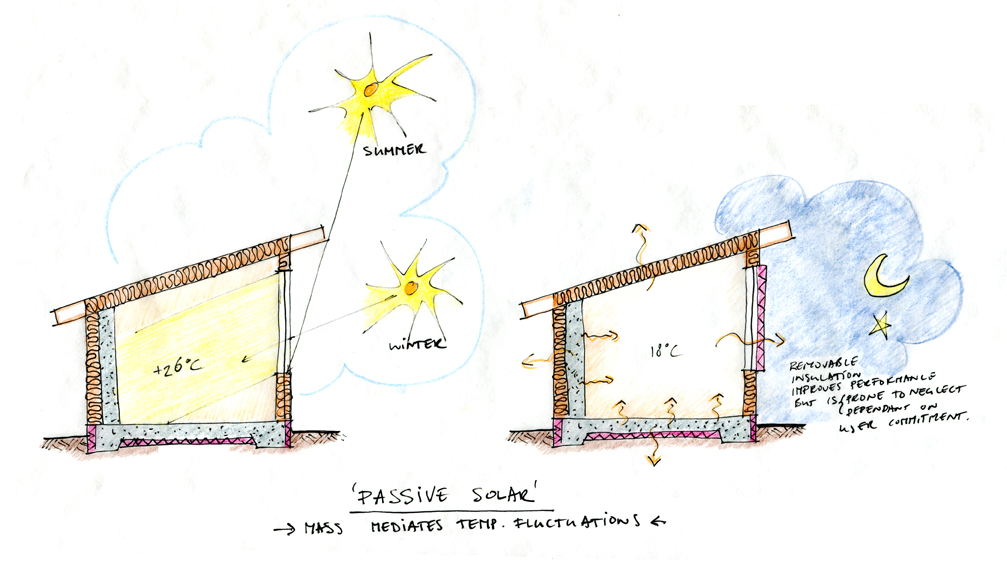 Heat transfer does not discriminate and will find its way from a higher temperature to a lower temperature though the path of least resistance and inadequately insulated mass components will radiate heat to the exterior as well. Often passive solar homes count on the solar energy gain for their heat savings and neglect the heat loss due to the inefficient thermal insulation prescribed by building codes.

Better passive solar homes would increase the thermal insulation of the envelope and add insulated shutters to the windows at night to reduce heat loss.

Increasing insulation is not an easy sell in this world where building is expensive and energy is still relatively cheap (in Canada anyway), and it is even harder to convince clients of the benefit of the added feature of shutters – it is a rare person that enjoys going around the house closing the shutters at dusk, and again to open them at sunrise.

Besides, the inherent problems with condensation and thermal bridges of ingenious thought-out operating systems would leave me unconvinced as well.

The best solution I have come up with is the installation of space age radiant heat reflective shades, but they lack the performance that I am looking for.

An extreme example of a passive solar home is the ‘Earthship’ concept, developed by New Mexico Architect Michael Reynolds. 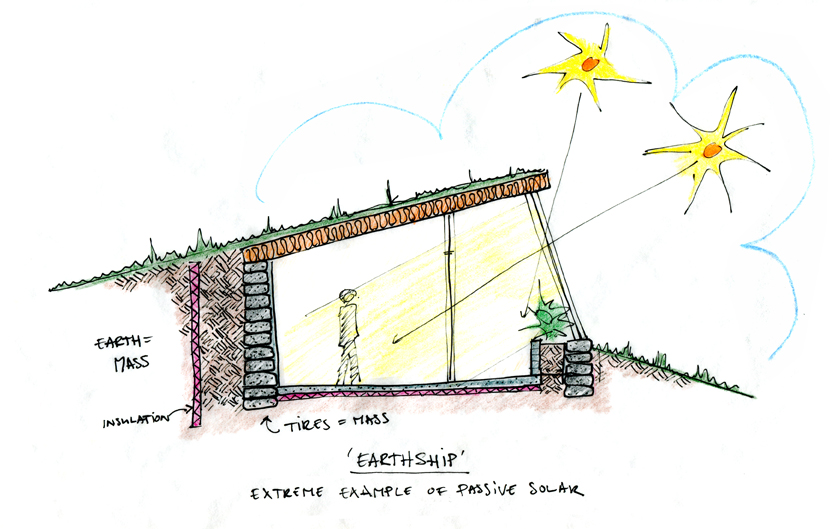 An Earthship relies on the heat storage capacity of the Earth, an extreme amount of mass, by digging the home into a hillside and exposing the sunny side entirely by means of an all glass greenhouse – along the full length of the building. The green house collects the solar energy in fall, winter and spring, while the excess heat can be vented directly to the outside in the summer.

-Besides this, an Earthship integrates some cool food, water, energy and waste systems that enable an Earthship to be self sufficient, but I won’t get into that in this post – you can check it out on their website.

This system works wonderfully well, as long as you enjoy sunny winters. If you live in a climate with grey and cloudy winters, these passive solar houses won’t work as well and will still need a sizeable heating system.

Unless you can hang on to those sporadically captured solar rays for a very long time and even harvest the energy from the ambient light of an overcast sky!

Passive House, a building concept developed over the last 20 years by Prof. Wolfgang Feist, a building physicist from Germany, does just that. 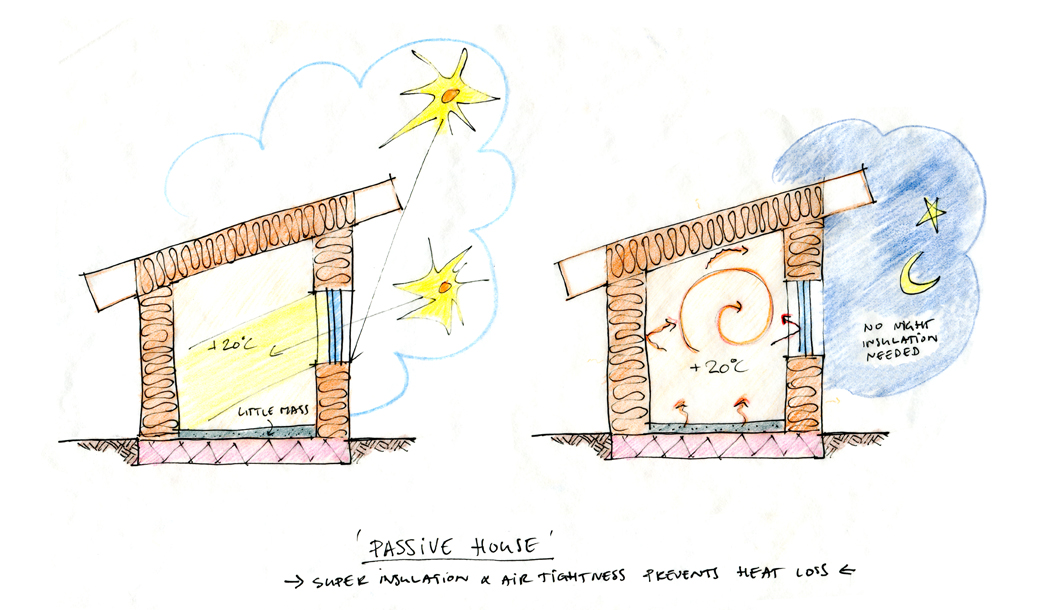 A Passive House is made as airtight as possible, since air infiltration contributes to a large amount of heat loss. Heat transfer by convection is much higher than heat transfer by conduction. Modern vapour retarders – air tight but not vapour tight – and sealant products now make very air tight building envelopes possible.

A mechanical ventilation system with highly efficient heat recovery makes sure the Passive House is provided with fresh air at minimal heat loss. 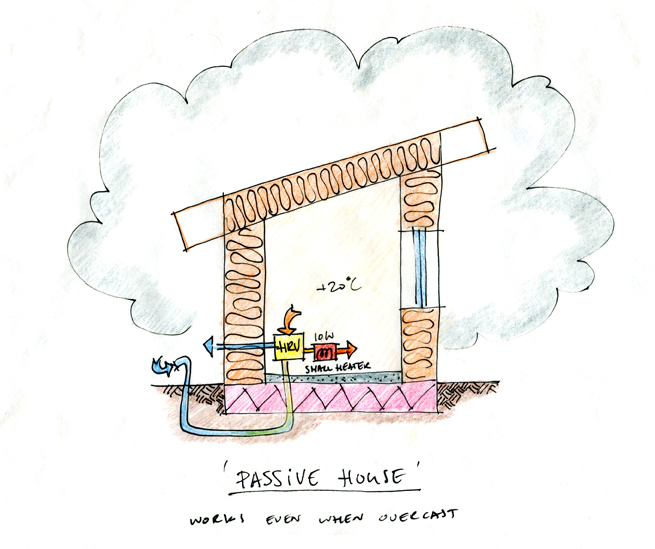 Thermal bridges by penetrating elements such as balconies are eliminated or minimized as well, as they are another large contributor of heat loss.

By designing and building with the guidelines of the Passive House concept, a building becomes so energy efficient that the savings of downsizing, or even eliminating the heating system can pay largely for the investment of extra insulation, air tightening and HRV system.

Hajo Meijer is the sole proprietor of Ecocentric Design, committed to deeply sustainable architecture. Hajo is a graduate from the faculty of Architecture at the TU Delft in the Netherlands and a certified Passive House Designer. Hajo lives with his family on Vancouver Island, British Columbia.
View all posts by Hajo Meijer →
This entry was posted in Passive House, Passive Solar Design and tagged Earthship, Passive House, Passive Solar Design, PassivHaus. Bookmark the permalink.

One Response to Passive [Solar] House